Originally release on The Woman’s Cave hosted by Jane and Wilnona, this is the first of two interviews I’ll be doing with Tara Woods Turner where I discuss The Benevolent Deception, working for multinational oil and gas and mining companies, backpacking in Africa, what makes a good thriller novel and the writing process. 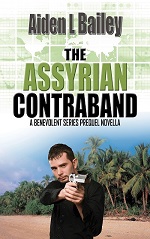 is the author of the mind-bending, espionage adventure thriller novel, THE BENEVOLENT DECEPTION, described by readers as a “thought-provoking and utterly unique thrill-ride” and THE ASSYRIAN CONTRABAND, described as “without a doubt a great story, and is well worth a read.” Sign up to Aiden’s MAILING LIST to stay informed of new interviews as they are released and learn more about Aiden’s fiction.